(CNN)Once-crowded city streets are now empty. Highway traffic has slowed to a minimum. And fewer and fewer people can be found milling about outside.

Global containment measures to combat the spread of the coronavirus have seemingly made the world much quieter. Scientists are noticing it, too. 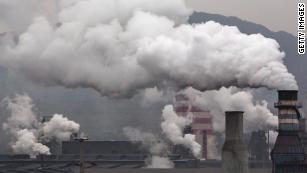 There’s an unlikely beneficiary of coronavirus: The planet
Around the world, seismologists are observing a lot less ambient seismic noise — meaning, the vibrations generated by cars, trains, buses and people going about their daily lives. And in the absence of that noise, Earth’s upper crust is moving just a little less.
Thomas Lecocq, a geologist and seismologist at the Royal Observatory in Belgium, first pointed out this phenomenon in Brussels.
Brussels is seeing about a 30% to 50% reduction in ambient seismic noise since mid-March, around the time the country started implementing school and business closures and other social distancing measures, according to Lecocq. That noise level is on par with what seismologists would see on Christmas Day, he said.

The reduction in noise has had a particularly interesting effect in Brussels: Lecocq and other seismologists are able to detect smaller earthquakes and other seismic events that certain seismic stations wouldn’t have registered.
Take, for example, the seismic station in Brussels. In normal times, Lecocq said, it’s “basically useless.”
Seismic stations are typically set up outside urban areas, because the reduced human noise makes it easier to pick up on subtle vibrations in the ground. The one in Brussels, however, was built more than a century ago and the city has since expanded around it.

Our staff is teleworking. The earth continues shaking. Ground movements at frequencies 1-20 Hz, mainly due to human activity (cars, trains, industries,…) are much lower since the implementation of the containment measures by the government. #StayHome @ibzbe @CrisiscenterBE 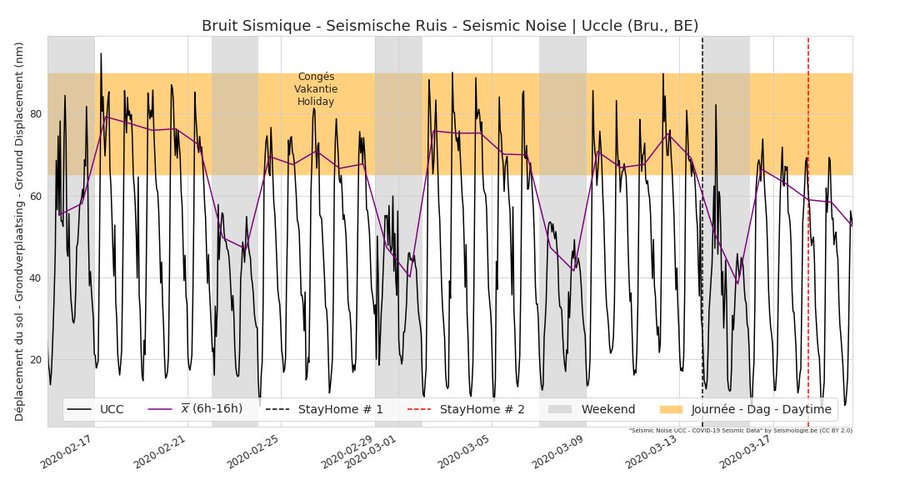 The daily hum of city life means that the station in Brussels wouldn’t typically pick up on smaller seismic events. Seismologists would instead rely on a separate borehole station, which uses a pipe deep in the ground to monitor seismic activity.
“But for the moment, because of the city’s quietness, it’s almost as good as the one on the bottom,” Lecocq said.
Seismologists in other cities are seeing similar effects in their own cities.
Paula Koelemeijer posted a graph on Twitter showing how noise in West London has been affected, with drops in the period after schools and social venues in the United Kingdom closed and again after a government lockdown was announced.

How the seismic noise on our little @raspishake seismometer running in West London (Twickenham) has been affected by the #covid19UK lockdown. This is a month of data for station R091F. The average noise levels are down reflecting fewer trains, buses and cars. 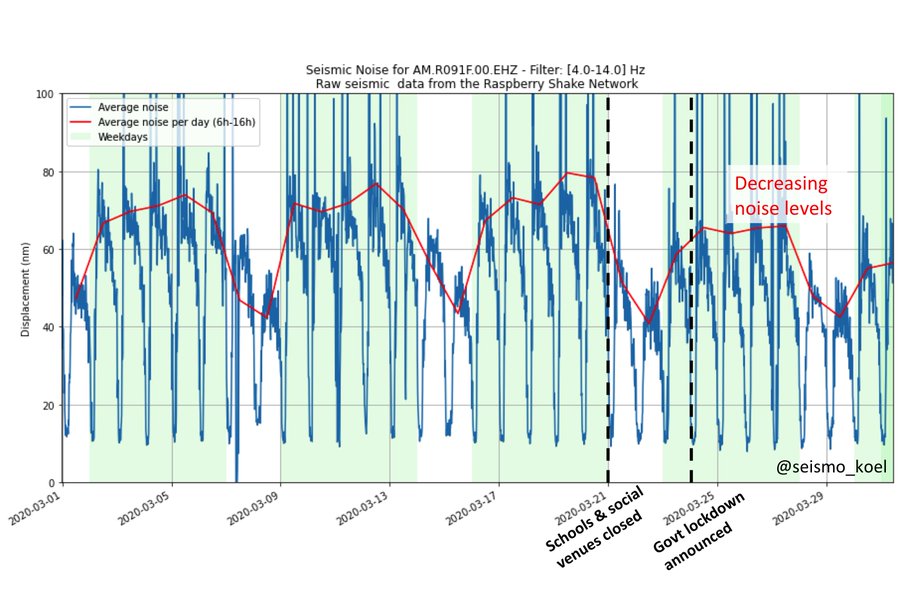 70 people are talking about this
Celeste Labedz, a PhD student at the California Institute of Technology, posted a graph showing an especially stark drop in Los Angeles.
Still, seismologists say the reduction in noise is a sobering reminder of a virus that has sickened more than one million people, killed tens of thousands and brought the normal rhythms of life to a halt.

Lecocq said the graphs charting human noise are evidence that people are listening to authorities’ warnings to stay inside and minimize outside activity as much as possible.
“From the seismological point of view, we can motivate people to say, ‘OK look, people. You feel like you’re alone at home, but we can tell you that everyone is home. Everyone is doing the same. Everyone is respecting the rules,'” he said.
The data can also be used to identify where containment measures might not be as effective, said Raphael De Plaen, a postdoctoral researcher at Universidad Nacional Autónoma de México.
“That could be used in the future by decision makers to figure out, ‘OK, we’re not doing things right. We need to work on that and make sure that people respect that because this is in the interest of everyone.'”
Original article : https://edition.cnn.com/2020/04/02/world/coronavirus-earth-seismic-noise-scn-trnd/index.html?utm_medium=social&utm_term=link&utm_source=twCNN&utm_content=2020-04-03T12%3A30%3A06

NFTs in the Music Industry

The world of Crypto

Laurent Lamothe the investor, talking about untapped niche markets and...

The world of Crypto

Laurent Lamothe the investor, talking about untapped niche markets and...